Okay, so for all of you guys who weren’t aware of the fact that I love fan fiction — SMUT-FREE fan fiction in particular, well… I’m putting it out there. I love smut-free fan fiction for my favorite shows. It really is a rare thing to see to have fans write alternate story lines for much beloved characters without having to indulge feeding the lowest common denominator, in terms of “HEY! Let’s have the protagonist fall in lust with the best friend/2nd lead and have a crazy-illicit/homo-erotic affair.” I HATE when fan fiction writers do that.

It insults both our intelligence and appreciation for STORY.

Speaking of which, please do enjoy the show:

So I love, love LOVE this video: the subtext, the lovingly retro kitsch, the tugging at your heart strings with this alterna-epilogue to the original Karate Kid movie, making the story center around the bully’s wound and journey towards redemption. I LOVE that Daniel-san has that WTF-daddy-betrayed-me moment when he sees the Johnny character train with the Mr. Miyagi character and that it’s Johnny who saves him in a pinch and sets him straight in one, bromantic, sweeping gesture of lending him a helping hand. YES, it’s funny, but it’s more of a funny-awwwww than a funny-haha-that’s-so-dumb. I mean, who doesn’t love a good slice of the anti-hero’s struggle? Especially one that pleads so earnestly for sympathy, and a need for love?

But you know me. Earnestness is my Achilles heel when it comes to my being a soft touch.

So there are a couple of cool things happening in the mix. A few of which I forgot to report about in the past few weeks, I’ve been so sidetracked!

LA COUNTY, namely, the LA Weekly, we thank you!

Whatever the criteria is for web presence, I am so happy to see that we’ve not only met, but possibly even SURPASSED what was necessary to nab the prize.

stop it. i'm blushing, you guys!

Weird aside — I think we got an award for a similar category last year for Chego’s website (the most anti-flash, anti-I’m-a-restaurant-website EVERRR). Was there an awards ceremony/party? I ask because last year, a friend of ours who had also won an award had texted me one night while I was out serving some Ooey Gooey Fries:

friend: “the awards ceremony! Chego won an award! u on ur way?”

Granted, I am NOT a party person. According to Meyers Briggs, I am an INTJ. (An introvert who prefers to think and judge over feel and perceive — though, I do want to cut in and assert that INTJs HAVE FEELINGS, as critically UN-feeling as we come off sometimes. One of life’s little ironies! ) So, I might not add a lot of sparkle and pizazz to any huge shindigs. Networking events? Painfully awkward for creatures of my kind.

Anyway, it was nice to receive this shiny plaque w/ it uber cute gold-dipped floppy disc in the mail , so we super really do appreciate it! And if there wasn’t an invitation due to a social faux pas in the past — I TOTALLY GET IT. I am the queen of accidental and unintentional offenses.

IF there was a party, though, and IF it seemed like Kogi or Chego were weiiiird for not showing up to the awards ceremony/event, I DO want to make it clear that it wasn’t that we were ungrateful in any way, shape or form.

The award is graciously received and I hope we can feed you with some inneresting and occasionally moving content for years to come. Thank you to all the people who continually read up on this blog, eat my words and dare to leave a strong opinion in the comments section. Yes! Even the angry ones! ESPECIALLY the angry ones! They help me reframe my thoughts, arguments and opinions, while reminding me that yes, yes, I do care very much about this little corner office of mine on the Kogi website. (( H U G )) So thank you, also, to the team or group of peoples who still see something special here with Kogi.

BUT WAIT! THERE’S MORE!
We do want to thank the OC — namely, the OC Register — twice over. I love, love, LOVE that we’ve been named Best Food Truck of 2012 in the OC, especially since we first started out at as an LA-based company. 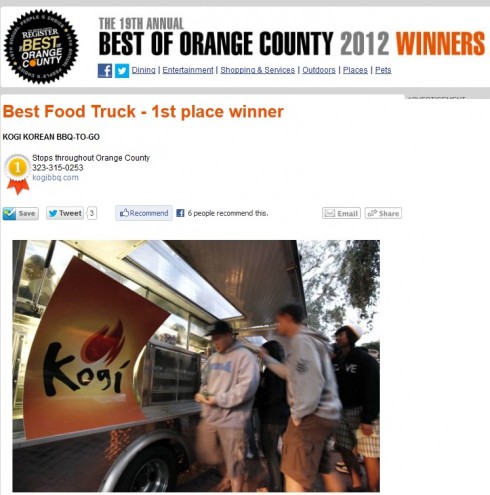 You’ve taken us in like we were your own and treated us like family, even though we come from a markedly different culture. The die-hards, the skaters, the families and white collar workers — thank you, thank you, thank you. Nobody loves a short rib slider QUITE as much as the people of Orange County.

Seriously. You all make driving down that long strip of the 5 South worth it. ^___^

P.S. If Mr. Miyagi looks familiar in the above video, it might because you vaguely recall enjoying Cary Mizobe’s equally hilarious performance in Dugan O’Neil’s FEAST OF FURY, the Levis-Kogi collaboration half a year ago.