So LiveNation’s been kind enough to gift one of you dudes with a pair of tickets to see Aimee Mann live this Saturday, Oct 13th at the Wilshire Ebell Theatre.

You might most recently remember her from her spot w/ Sarah Mclachlan in Portlandia:

Or her latest release, “Labrador.”

Speaking of WHICH, onto the giveaway. Since this is her 8th album, I’ll have the pair of tickets given to the 8th person to correctly identify which music video by which band “Labrador” is making a painfully funny stab at. A hint: it’s tied to Aimee Mann’s former incarnation back in the 80s. And it’s also mentioned in the above video.

STEP 1: IN THE COMMENTS SECTION OF THE BLOG, NAME THE MUSIC VIDEO (SONG AND BAND NAME) THAT THE ABOVE “LABRADOR” IS REFERRING TO.
STEP 2: EMAIL ALICE@KOGIBBQ.COM YOUR CONTACT INFORMATION (first and last name, phone number, email address) TO BOTH QUALIFY AND ENSURE THAT YOU SHALL GET YOUR PAIR OF TICKETS FOR TONIGHT’S SHOW.

If I do not get your contact information, the pair of tickets will be given to the next person in line to gift me with their info.

Now that we’ve got that gargantuan Chego menu change up and running, it is time to tackle the Kogi Test Kitchen at the Alibi and actually have the Test Kitchen live up to its name. Namely, the items we shall be showcasing week by week may or may not make it onto the trucks. Hence test kitchen.

(And for the Kogi fans under 21 — sorry, kids, but since Alibi’s a bar, they can’t legally let you in through the front doors.)

Unlike Chego, instead of making one sweeping change, we’re going to parcel out our new items, one by one, every Tuesday. As fun as the menu change hath been at Chego, we learned a valuable lesson in stress (and its subsequent lack of management) regarding making too many sweeping changes in a singular kitchen in 1 day. Plus the kitchen at the Alibi in Culver City’s pretty itty bitty, so there ya go. 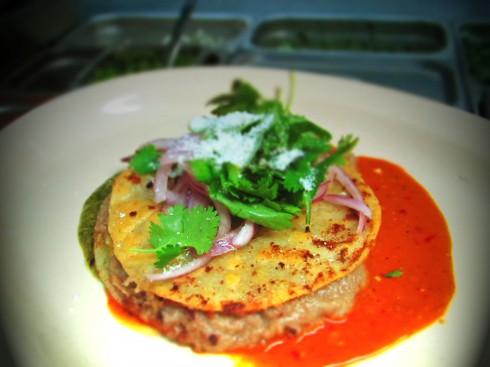 It’s simple, it’s straight-up, and it is surprisingly satisfying, vegetarian or not. I ate almost two of these, but had to share. :*( Paired with icy beer, and you’re probably set for dinner.

AND A DIP BACK INTO CHEGO LAND
My pick of the week as the dish that everrrrrybody at the table’s gonna be fighting over, hands down: 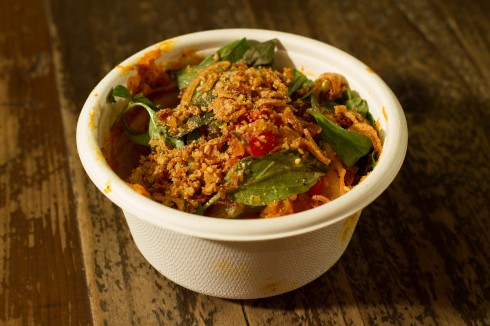 What was named the Kabocha Pudding Cup is not being renamed as the Smashed Kabocha Cup. –__–;; I dunnoz dudes. The dish is mind blowingly amazeballs, and yet no one’s giving it a try. So it must be the name. Or something. OR SOMETHING.

Honestly, this is my favorite add onto the menu, so I’m trying to figure out why people aren’t even trying it.

It’s roasted kabocha and sweet potato that’s been mashed and fluffed into a velvet-smooth puree that’s got an almost nutty depth and a strong lick of umami from the soy glaze. The slow roasted tomatoes and other seasonal veggies w/ the breadcrumbs and olive oil add so much more brightness and savory to everything else in the cup, so I just don’t get it.

I will say that there have been quite a few questions regarding what kabocha is, so I’ll explain it here, though it can very easily be wiki-ed. Kabocha = Japanese pumpkin, and its timing is apt now that fall’s arrived. It’s been slow roasted to really caramelize those natural sugars and pounded smooth with the tooth achingly sweet Korean sweet potatoes.

You know how Spam was once considered the poor man’s roast ham? Well, the smashed kabocha is like the super foodie rich man’s luxurious cuppa mashed potatoes. Seriously. YOU NEED TO TRY THIS. IT IS GOOD. IT IS AMAZING. AND IT WILL MAKE ME CRY TO TAKE IT OFF THE MENU BECAUSE NO ONE’S ORDERING IT.

Have any of you heard of Rides.tv?

I first heard of it during the summer when I took a class at this writing camp with Maureen McHugh. If the name sounds familiar, you are probably familiar with China Mountain Zhang or saw her name on the shortlist for a Hugo award or two. (I believe she did win for one of her many short stories.)

Anyway, Rides.tv is her latest gig and I was really intrigued when she described it as actually STEPPING INSIDE a movie, INSIDE a video game and and plugged into the experience via all your communications outlets. So you’ll get on the ride and throughout the short film you’ll be texted or emailed clues, receive phone calls in real time as the movies are playing and the characters are contacting one another.

I remember slaving through somewhat similarly epic projects in my creepy-little-girl bedroom (lace curtains framed with giant bows printed with bows and the wall paper of more bows and flowers bordered with a lifeless army of porcelain dolls) the tail end of my high school years (please don’t ask to see them), so it was definitely something I mentally filed away to give it a try.

HOLY SHIT. I WANT TO WORK FOR RIDES.TV.

Since most of the rides are horror based, with a comic note here and there, I’d agree that “rides” is an apt term for each creepy, thrilling experience for the adult imagination.

Basically, you set up an account with your email and phone number, and you choose which show or episode you want to ride. Then you press play. At certain key moments, you might receive an email, a text message, a phone call or a sneak peek into a hidden room, a diary entry or a private video of the characters doing something particularly eyebrow-raising.

But careful, now. It’ll start blowing up your phone with weird ass text messages that you’ll have a hard time explaining to your friends, real and imaginary.

If you’re like me and LOVE being immersed into the story of a video game, particularly an RPG, but aren’t particularly interested in developing the level of skill necessary to beat the blasted thing, then RIDES.TV is for you. Por ejemplo, I LOVED Final Fantasy 7, 8 and 9 — but I HATED that I could only experience it by looking over my little brother’s shoulder to enjoy the FMVs. With Rides.Tv, you don’t have to wait for your little brother to be in the mood to play the game for you to access the story or be mad when he gets to the next level without you.

In some ways, it really is like playing a cool video game without having to develop any level of skill. (I know every gamer in the audience is cringing.) Admittedly, I’m a bit lazy like that and have two left hands when it comes to the coordination, speed and memory necessary to be a good gamer. (This is also why I never particularly excelled at sports in high school.)

That said, it is still in its beta phase, so I think it’s too early to hold up each and every piece for scrutiny. I’ve ridden several of the rides, and there have been incredible hits and “meh” misses. And I can’t even knock the misses because as a former film studies major, I can understand that each piece is an ambitious undertaking. I can see where some of the stories fall flat because they focus too hard on sharing with the audience with all the cool toys and nifty gadgets their new avenues of technology allows them. And I can see strong stories flagging because the writer has not been paired with the correct actor to carry off the part or is awkwardly trying to hit the right notes with these new play things.

But when a ride hits most of its marks correctly, it can be a beautiful thing to experience.

Plus, I love having access to a character’s psychology that nobody else in the story has access to! There’s a reason why the production company is called Fourth Wall Studios, after all.

In any case, I would love to recommend 2 rides for newbies: Dirty Work and HOME.

Dirty Work is actually a comedy, but the kind of comedy it is — well, if you could imagine the cleanup crew for Dexter getting its own sitcom, you’ve got yourself Dirty Work. I think the story telling really hits its stride by episode 3, “Armadillo”. Since it’s episodic you can really just jump there and not miss a beat.

It’s got sorority girls, some daddy-daughter-son drama and a musical number/PSA on leprosy tacked onto the end. It is hijinks galore with a strong touch of heart. I think the actors are still well on their way to making each of their characters shine, but I think the person who plays Michelle really nailed it since eppy 1. Her backstory? She’s a straight-talking-but-sensitive gal who needs the extra money to finish her trans-ition. How can you NOT fall in love with her?

Though the acting and story telling is not ALWAYS pitch-perfect, it really shines in showcasing all of the capabilities of a ride. It’s like the writing team of Aaron Shure and John Newman really knocked themselves out with the directors Eric Appel, Aaron Shure in successfully integrating all the neat-o bells and whistles that come with the site.

My favorite items in the backdrop?

Home is more of a short film than an episodic run (though I really, REALLY wish it came in several additional installments). Now THIS is a ride that doesn’t NEED bells and whistles because the storytelling is so damn strong.

It’s been categorized as horror, but I would more accurately classify it as a creepy, sometimes psychologically disturbing, family drama.

It centers around a pair of daughters, one of which who wants to stage an intervention with their compulsive hoarder (see: craaaazy~) mother.

Yeah. Her mom really doesn't want to give up her sh*t.

And though I can write an exegesis on Home: A Ghost Story like I had with Genki Sudo’s “World Order” and Psy’s “Gangnam Style”, I shall spare you. (This post is embarrassingly long as it is!)

In a nutshell: remember the show “Are You Afraid of the Dark?” Well, imagine that the writer behind it all was Hugo-award-winning Maureen McHugh and there ya go. It’s really good. Delicious, even, as far as rides go. And I think she also got extra lucky in being blessed with a talented director and team of actresses who completely fall into their roles without any hesitation or second-guessing.

If ever you wanted the story of the Collyer brothers to come to life, this would be its contemporary equivalent.

I encourage each and every one of you to grab a RIDE and get on it. It’s way cool. And free-99 to boot-y.

Seriously, if it’s THIS good and seamless in its tech-integration (no lag-time, very quick loading and perfectly-timed phone calls that add to the story) during the BETA phase, I can only imagine what it’ll be like once it’s past its soft opening. This really’s got hot potential written all over it and I can’t wait to get on all the rides I missed and see what’s next.

WHEW. I know. That took a while. And could you imagine that there were 2 other topics I wanted to cover in this post? No matter. They shall have to wait til next week. I’ve held your attentions hostage for far too long.

0 Responses to AIMEE MANN giveaway, the new Kogi Alibi Flaquitos, In The Mood For Spooky