Meet Walter. He's just one of the many who make your bowls possible and his hands happen to have a starring role in the video WAY DOWN below. I ruv him!

As mentioned, we’re in the final stages of tasting for new menu items at Chego and Alibi.  I won’t give too much away, so I’ll let the pictures speak those thousands of words on my behalf. 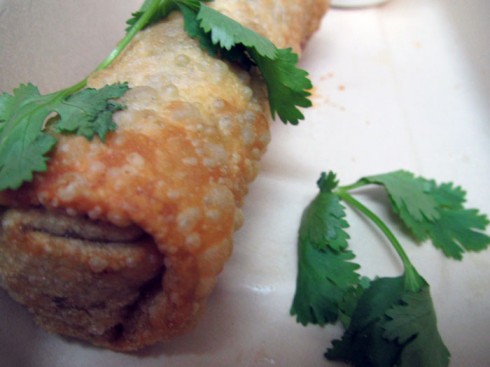 What kind of juicy, savory innards could possibly be hiding inside the mystery eggroll's crunchy, chewy, delectably fried exterior? Just know that it's something that's friendly with herbivores and omnivores alike. 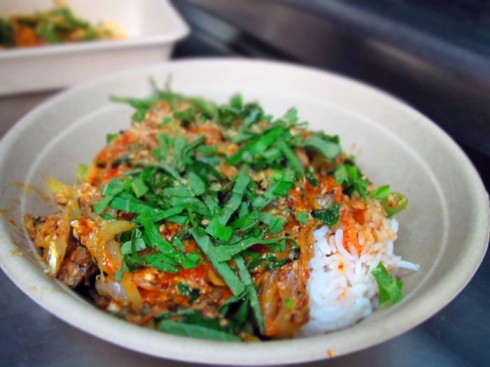 Yes. The Buttered Kimchi Chow got a makeover. A makeover that'll make even its most hardcore of fans happy. 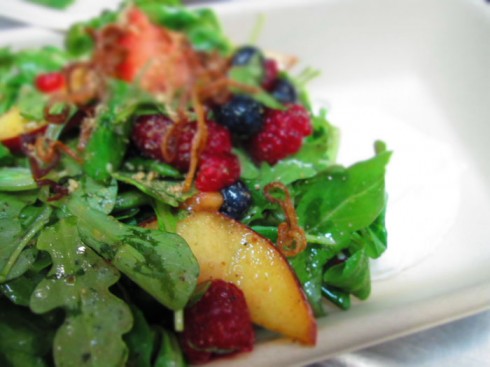 THIS MADE ME SO HAPPY. Who knew what a little dollop of yogurt curd could do for a salad? 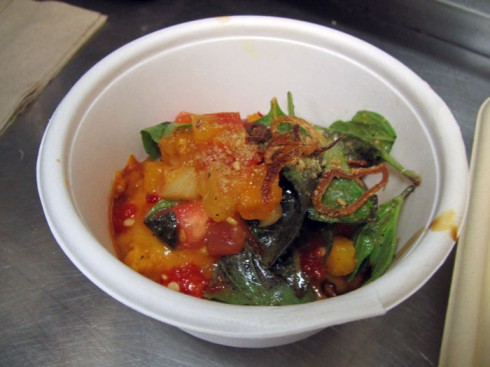 THERE WAS A LOT to get through at the tasting. So it says something that I was scraping the sides of that little paper cup to get every bit of it into mah belly. I really liked all of it, but this was, hands-down, my supreme favorite. SUPREME. It was funny, the first bite was something I didn't expect. The texture, the taste, I was a little thrown off, but dammit, by the time I got to the third bite, it was over and I was pretty much sprung on this surprising little cuppa roasty toasty tasting goodness. 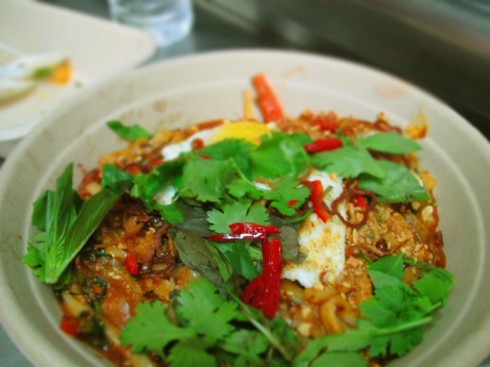 I hope y'all will very warmly welcome Chego's very 1st official noodle bowl. Like 99.9% of everything that's Roy Chulo Choi, it. is. INTENSE. >__< Trust. This is a bowl that will not bore your mouf. One bite and it's pau. 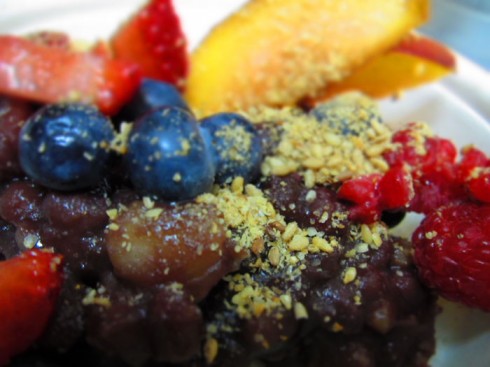 Oh ho ho. For all y'all that complained about the retirement of Mr. Pat, THIS WILL COMPLETELY JUSTIFY HIS ABSENCE. Yes. It's a dessert. And something I can order 5 or 6 of and eat all day long. Especially in this frakkingly relentless HEAT. 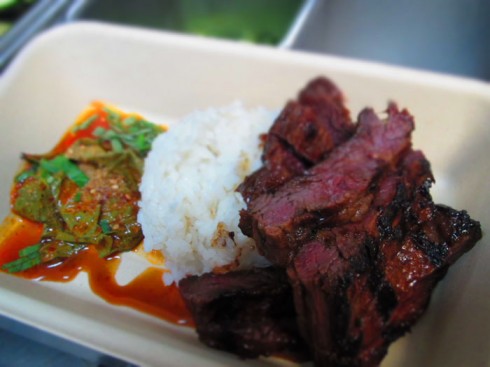 The picture pretty much gives everything away. Like a lady on the corner of Hollywood and Melrose on a Thursday night.

(disclaimer — these shall not be available on the trucks.  At least not just yet.  Hence we’re going to give it a go go at the Kogi Test Kitchen at the Alibi Room at the end of this month.) 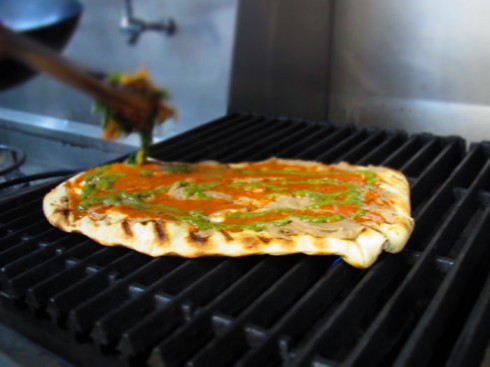 The beginning stages of the Kogi pizza. With a tall glass of cold, dark beer, there reallly isn't gonna be anything else like it. 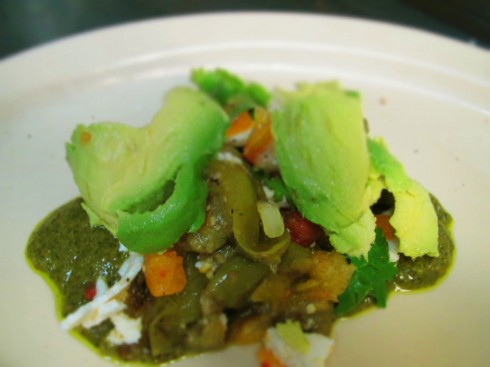 A bed of deliciousness awaiting to be crowned with plump, juicy shrimp. 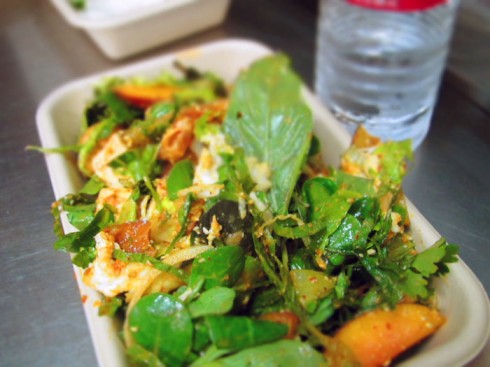 FINALLY. A salad that screams Kogi. Yes. I know. And you're very welcome. 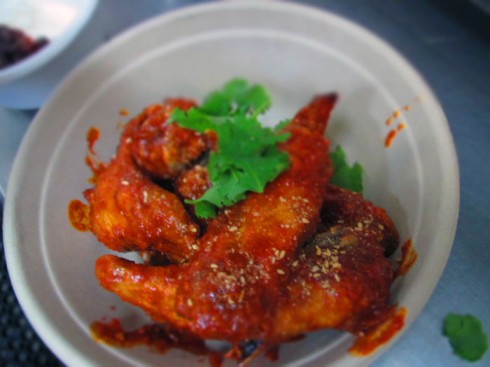 Hungry, these tasty little f*ckers are, to be dipped in unbelievably creamy dreamy homemade ranch sauce. 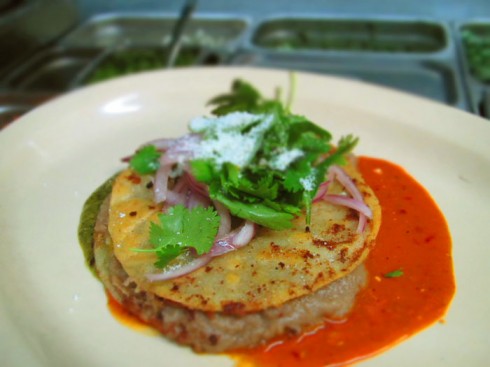 Hands down my favorite Kogi addition. And that's all I'll say about that one.

Siiiiiiiiiiiiiiiiiiiiiiiiiiiiiiigh.  It feels good to have something new to report about in the world of all things Kogi and Chego.  Speaking of which, I’ve finally finished an insufferably frustrating and unnecessarily long Chego video project. Why it took so long?  Because I was working with new software that was not as intuitively simple or as easy to use as it had been marketed.

My brief review of the software: ADOBE PREMIERE ELEMENTS, WHY MUST YOU THWART MY EVERY AMATEUR AMBITION??!!

Admittedly, I’m not quick on the uptake when it comes to learning new software programs, but I normally am able to figure out the most basic components or logic behind the way programs are run once I’m given the time and opportunity to sit down and hyperfocus on them with Asian snacky snacks in one hand and a monstrously caffeinated beverage in the other.

Maybe I have control issues when it comes to people or programs trying to make my mind up for me before I get a chance to think.  For example, when I cut a piece of footage, WHY DOES THE PROGRAM IMMEDIATELY CLOSE THE GAP FOR ME??  Gibberish, I know, to people who have no idea what it is that I’m referring to, but in a nutshell, I’ll do one thing, the program will assume it thinks it knows what I’m trying to do and then DO IT FOR ME — which wouldn’t be so horrible if it weren’t for the fact that it’s DOING THE WRONG THING.

So half the time I’m fixing my mistakes and the other half I’m fixing the mistakes of a program that seems to be going out of its way to NOT work with me.

While I’m not extremely pleased with the way things turned out, it ultimately does serve a function: to help out those not quite getting the to-go counter, so I’m going to put it up and out there.

You see, the original intent of this project was to help people more efficiently wrap their Chego bowls at the to-go station.  Because I noticed that half the people kept staring at the to-go station the way a new girl with an appetite and a wallet full of cash would stare at the multiple service counters at Porto’s. She knows she’s supposed to take a number and find her way to the appropriate line, but she doesn’t know where to start.  She doesn’t want to stick out as the only idiot, but she doesn’t want to risk asking a dumb question in a bustling crowd full of peoples who already seem to know the drill and have it down pat.

While I don’t think our system is anywhere near as complex, I can see how someone might feel a little overwhelmed and afraid of making eye contact, shoving everything, quick and sloppy-like, into a plastic bag.  Bowls get smushed, fried shallots rain over the passenger’s seat, fried eggs slide out from under the less-than-secure aluminum foil that vaguely intends to act as some kind of lid to the container.

IT DOESN’T HAVE TO BE THAT STRESSFUL, PEOPLES!  AND HERE’S HOW!  (P.S. Credit must go to where credit is due: Noel, one of our regulars. Grashus, Noel!)

Chego To Go Go from Alice and Eric Shin on Vimeo.

Also, let us only hope that I shall figure out Premiere Elements so that I can come to realize that it DOESN’T HAVE TO BE THAT STRESSFUL.  ::rolls eyes:: Let us HOPE.  And possibly pray.