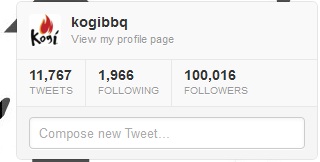 Okay, I missed it by about 16 followers, so I failed to screen cap THE EXACT MOMENT.  But that doesn’t make my joy and pride in our fans any less glorious.

AND NOW SOME MOOD MUSIC:

To give a little context, since our inception, I’ve never begged for fans to follow our Twitter feed and I’ve never allied with other Twitter feed to boost one another’s members.  Our company never bought followers and we’ve never used any sophistimacated or high school student council tactics to get people to “add” us.

Soooooooooooooo yeah, surpassing 100K after 4 years feels pretty good, especially when knowing that we don’t inflate our numbers with PR or social media alliances. It’s not to knock any other orgs or businesses or personalities or feeds. That’s their style. And for them, it totally works and makes sense for what they do.

I’ve committed our feed to just go about our business differently is all. And over the years we’ve been hollered at to join the way everybody else seems to be doing things, but I think the 100K helps validate and support a decision to be clean, direct and straightforward with our fans without making any excessive demands for their attention.

Also, it just really reaffirms my belief in our fans and the affection I feel for each and every one of them. For me, the love is real. I actually felt a little emotional when we hit 100K and thought to myself, “Wow, you guys. Wow.”

We’re not a national chain, we don’t have our own reality series and we don’t sell our own cooking lines or heat-em-up meals in the frozen food aisle. Our footprint extends no further than the OC 99.9% of the time. So it’s not even like we roll all over So-Cal.

Y’all are amazing. And help us continue to do what we do. And so I’d like to personally thank you for all of that. It hasn’t been easy and when times were especially tough there have been moments when everybody in our company wanted to give up and run — not walk — away. So I mean it when I say that if it hadn’t been for your support, your loyalty, your affection, we would not be rolling out our trucks today.

We know and understand that there’s been a lot of upset over the possibility/probability of certain Kogi and Chego items that are leaving the menu. And your pleas have not fallen upon deaf ears. Roy Chulo Choi does, after all, have a soft touch. Beneath the baseball-cap-wearing, scuffed-up-sneaker-toting, LA-OC-flavored tattooed exterior lies an pudding-soft interior — and beyond that, an ooey gooey center that wants nothing more than for everybody to hold hands, get along and be happy, dammit!

There shall still be some significant changes and tightening up of the menu at Kogi, Kogi Alibi and Chego, but we’re open to the idea of having y’all vote for what shall be spared the ax.

In other words, I want you all to think long and deep and reach inside yourselves to answer me this: if you could spare one and JUST one menu item from leaving Kogi and Chego, what item would that be?

Think about it. If the response is significant enough, we shall open the floor to voting next week.

Also, por vouz: I was playing around (and by playing around, I mean banging my head against a wall in frustration over my own ineptitude) with my Adobe Premier Elements and created a slide show of all items that are in danger of leaving the menu. Give em a good look see and see which one makes your heart cry the most.

Sidebar commentary: Hopefully Youtube won’t mute or delete the video immediately and let it hang for a few weeks. That’s all I ask. I’m not too attached to it. It’s essentially my first DIY craft project with Premier Elements and I’m completely aware that my technical skills are somewhere close to terrible. I’m honestly not trying to impress ANYBODY here, peoples!

Speaking of things that make the heart cry, I do want to (in?)appropriately add an even more serious note to this post. (I know, this blog has been fairly emotional enough already, and for that I apologize.)

I normally don’t do this kind of thing, so I do want to assert that Kogi has kind of a no-public-charities policy (kind of enacted by myself, ironically). And despite all of the above, I feel called to share this.

So let me first reframe: this is not a call for charity. I hope you will not, in any way, feel pushed or pulled to donate.

Full disclosure: I haven’t donated a dime yet. So I am the last person to shame or guilt anyone into giving their money away.

So here’s the story: former Kogi Twitter follower, @czarinasierra and her husband were killed in a car crash a few days ago and are survived by their 8-year-old and 6-month-old daughters. Their 6-month-old is still in the hospital under careful watch while the older daughter is staying with family.

Anyway, someone’s opened up a page called the Gerardo and Czarina Avila Memorial Fund in the interests of raising money to help raise their surviving children. If you feel moved to give them a hand, financially, you can click on the link above. If you’d like to send your condolences, there’s been a Twitter feed started up in their honor @AvilaMemorial.

My own personal, deepest condolences to the immediate and extended family. I sincerely pray that Gerardo and Czarina have left/will leave knowing that their girls are going to be okay. I also hope that the girls will grow up in loving circles of friends and family. May they receive any and all support or guidance that will help them grow into to becoming amazing human beings.

P.S. On a much lighter and brighter note, I’d like to congratulate PSY on gaining momentum on his diabolical plans for WORLD DOMINATION, as evidenced by the videos and pictures below. He was definitely a cult favorite in Korea for a while known for his incredible fan service and odd grab bag of talents, but nowhere near the international, internet-driven popularity levels of SNSD, B2st(Beast) or Big Bang. But there is definitely no disputing his mark on the summer of 2012, stateside and otherwise. Rumor has it that you are even connecting with Justin Bieber’s folks in the interests of surpassing 2011’s levels of Bieber Fever. ::pat, pat:: Your accidental ambition impresses me. Godspeed, PSY Oppa. Godspeed. ::salute:: 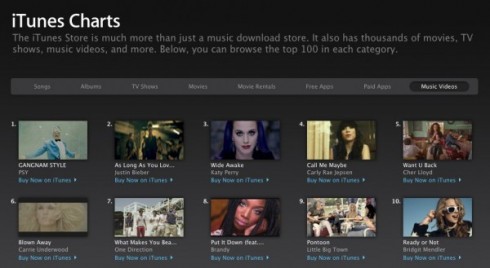 It's official. PSY is now the first Korean artist to rank at the #1 spot on the US iTunes‘ MV Chart

Even them Asian babies can’t resist. Seriously. And who knows? This dance explosion may become bigger than Beyonce’s “Single Ladies.” Queen Bey, you’ve been timidly warned.