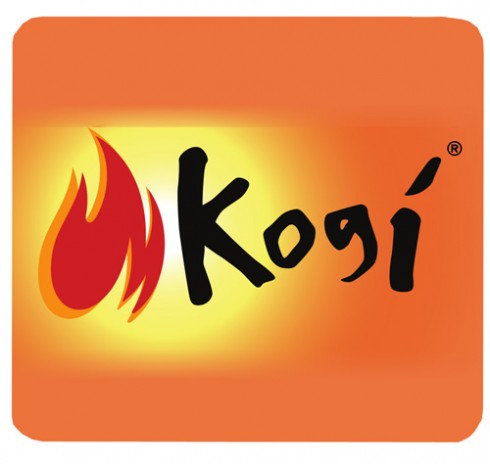 Sorry, I don’t mean to be a total c**** tease.  Because there is no Kogi app.  BUT THERE JUST MIGHT BE ONE fairly soon.  MIGHT.

The thing is, we’re fairly pragmatic people.  We didn’t get on Twitter because it was the cool thing to do.  It was more out of instinct and necessity than anything else.  People have been clamoring for us to get an app, but my question was why the hell would people want a Kogi app?  What would it DO?

So I went to the drawing board and thought about my smartphone.  I hate cluttering its interface with too many apps, so if I want to get one, it’s got to have a POINT and that point better be much more quicker and efficient than surfing the 4G network to happen upon its webpage.

Now, I’m not promising that this is what the Kogi app would do, but if I were allowed to fantasize a bit, here is why you would want one:

1) real time stats on each subsequent truck: VERDE, ROJA, NARANJA or ROSITA
2) lets you know each truck’s estimated time of arrival/ETA.
3) lets you know 10 min before it leaves a stop
4) menu rec for the undecided
5) lets you know when trucks are within 10 miles of your neighborhood
6) if logistics don’t get too crazy, lets you place an order on your phone.

Anything I’m missing?  Anything you’d want for the app to have?  IF we were to build one, it’d basically be for y’all, so feel free to throw your 2 pennies at this post in the comments section.  Like a mommy packing you a brown bag lunch, I only want to help build an app that you dudes would actually EAT/want to use.  We’re holding a meeting next week with peoples who are interested in working with us on this project, so if y’all could hit me up and let me know what you want for Christmas/the Kogi app before next week, that’d be super much appreciated!

And now for some mood music!

On an unrelated topic, just got off a plane from Peru on Friday with a lovely 14 hour layover in Lima from Cusco.  No, really — it was actually super fun, since a friend of mine was banned from flying to the US and had to straighten things out at the Taiwan embassy.  I was hankering for a Lima excursion before heading to El Salvador/LA, so it turned out to be pretty perfect.

Even though I was gone for just shy of 2 weeks, I still feel like I’m on another planet.  I’m having trouble figuring out what day it is, where my car keys are, where I parked my car, etc.  Discombobulated. I feel discombobulated.  So apologies if this post will come off as more disjointed than you’re normally used to.  Consider it literary turbulence.

Places I frequented: Cusco, Pumamarca, Pisac, Ollantaytambo, Tipon, Pucacocha, Pachatusan, Chincheros, Moray and a lot of other lovely places.  I think this is the first time I’ve been hardcore camping.  And by hardcore I mean no showers, having to pack my own sleeping bag and air mattress and no access to electricity of any sort.  Despite the subzero temperatures at night, though, we were a bit pampered when it came to the food.  A team of cooks would bring us 2 or 3-course meals 2-3 times a day, depending upon when we hit base camp again.  Corn and quinoa chowders, mountain soups, chicken, rice, pancakes, eggs — pretty hearty stuff.  And, as always, plenty of coca tea to help with staving off altitude sickness.  Elevation would range from 13,000-15,500 feet, depending.

DEFINITELY AN AMAZING EXPERIENCE.  And I highly recommend it to anyone who feels called to the mountains (they truly are godlike in Peru, and are even considered to be powerful sacred beings called apus) and connecting with ancient ruins.  It will take your breath away.  Literally.  Cuz extreme altitudes will do that to a person.

Also, the last time I talked to a person about the food in Peru, she and her husband said that it was JUST AWFUL.  I’m actually quite happy to report that aside from a few unexciting, meh! meals, the food was actually pretty damn tasty.  As long as you’re not too lazy about it. 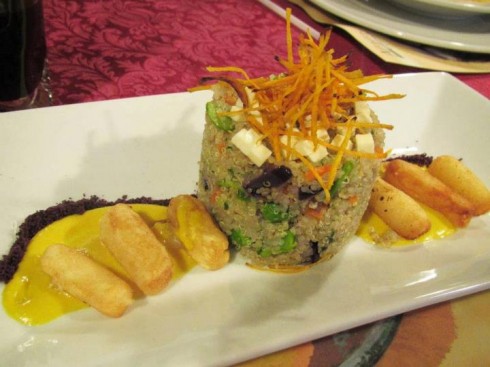 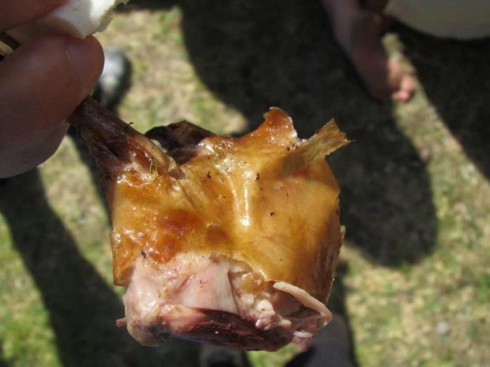 If you’re curious as to what cuy is, just know that it is deliciousness…if prepared well — just like any other animal protein.  This little buddy here was marinated in herbs and I think onion before it was roasted over an open flame.  Crisp skin, juicy innards and not gamey at all.  If you were to ask me what cuy tastes like, I’d say… the texture FEELS like chicken, but it tastes a lot like beef, if that makes sense.

it was actually highly auspicious that the ladies came offering us cuy for lunch after ceremony, along with some roasted potatoes.

They were super sweet and super nice.  And no, cuy is not rat, for those of you who were curious. 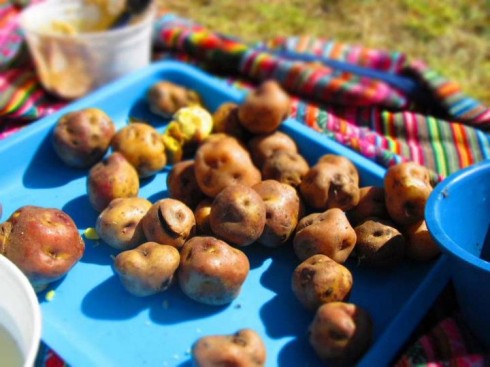 It was a pretty simple meal — cheese, cuy, roasted potatoes and a slightly spicy, creamy huacaina sauce.  The potatoes there are a little different from up here.  Starchy, more yellow and super tasty. 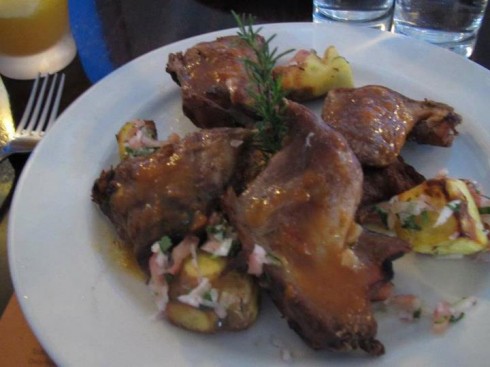 I had cuy again in a fancy restaurant in Cusco and it was just as, if not MORE!, delicious than the first time.

And, from what I gather, they treat them pretty humanely.  Barbie dream house and all.

No bacteria-infested factories or a bazillion guinea pigs squeezed together in a cage or force fed from tubes.  So I was pretty good with my decision to eat these adorable, super rico mammals. Le siiiiiiiiiiiiiiigh.  If we Kogi ever made roasted cuy quesadillas with salsa verde and grilled onions, that’s all I’d ever need.  For.  Everrrrrrrr.

Also, if you ever happen to make a pilgrimage to Peru, PONCHOS ARE KING.  And so is proper hygiene.

yes. i know i look very different without painting my face properly. apologies.

Without a proper poncho, you are going to DIE OF HYPOTHERMIA. And dying of hypothermia may seem glorious and “real”, but it ain’t cute, let me tell ya.

And just for the helluvit:

this would be in Moray.

The grass is actually a lot more dry and yellow in Moray, but I got greedy with Photoshop and made everything look a little more New Zealand-y.

Yep, that’s about it.  We wanted to cut labor costs by not having any bussers, but since the lunch hour has been fairly chill since its inception, we think it’s fine to let a few of the tired and weary to mosey on in and enjoy their bowl at a table.

Sorry, it’s been a while since you had your hit of Papi Chulo.  Wanna ride shotgun?

Riding Shotgun with Roy Choi from Alison Chernick on Nowness.com.

Speaking of butching it up — hath anyone been swayed by Pinterest? I have. On behalf of Kogi. Still in the works of building it up, but if you want to catch a glance, you can check it out HERE. If you happen to hold a Y chromosome and prefer Monster Energy drinks to a single origin coffee, Pinterest, in its current state, may not be of interest to you.

Yes, there are way too many straight girls on Pinterest. There, I said it.

Of course, if you want to run with Kogi and CHANGE that alongside me, I’d super appreciate it. As Pinterest stands, everything is pretty much one note. With very few exceptions.

At this point, I don’t care if you’re butch or femme or something else entirely. I just want something wild and DIFFERENT.

Join me. We’ll build a guild. It’ll be great. We’ll create something raw and alive and doesn’t taste so hermetically sealed and factory fresh. Who’s with me?

P.S. My flavorite music video of the moment. It’s weiiiiiiiird. But so adorable!!!