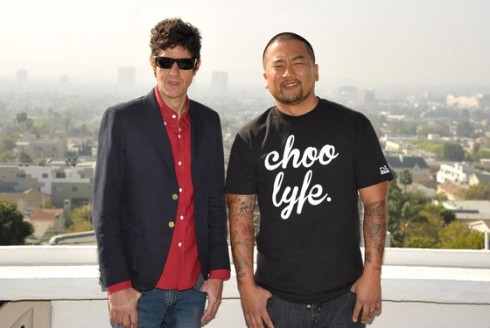 Yeah, that’s Mike D from the Beastie Boys.  And here’s a sample of what he has to say about Roy Chulo:

“…His work is really analogous to what a hip hop producer or dj does, chopping up a sample, re-contextualizing it, adding BEETS, maybe a little vocal and on and on.”

AHAHAHAHAHA. “BEETS”.  If you watch the vidjeo below, he is quoted as literally saying “beets”, which I am hoping is intentional and not some typo, because if the pun is intended, it’s pretty ingenious.  Because to a hungry DJ, nothing beets beats. Or nothing beats beets.  (And let me go laugh hysterically in my private corner now…)

Who knows?  Perhaps Roy Chulo will drop a roasted beet tape as a Kogi special one of these days.

Okay.  I’m over it!  I swear!  I’ll move on from the lame fixation on punning, I promise!  (Though this promise shall last only until the end of this blog post.  Lord willing.)

Roy Choi – Flavor of Los Angeles from The Avant/Garde Diaries on Vimeo.

Roy and the Kogi Truck will be cooking for you Thursdays, Fridays and Saturdays from April 20th– May 6th.

Come one, come all, dudes. It is going to be pretty KEWL. Just the Roy Chulo (that’s what I’m anointing him henceforth, since I’ve decided that Roy Choi aka Papi Chulo is just too many syllables for me to handle, if ya know what I mean, jellybean) exhibit alone will have the truck, the once-in-a-lifetime-only specials that’ll change up from week to week, his own art installations, DJs and plenty to stimulate all nine of your senses.

P.S. DUDE!!! DUDES!!!!! Okay, I might be the last friggin person to have noticed this, but BEYONCE has her own tumblr now! And even Baby Blue Ivy does, too! AND they’re actually amazingly well done! (I guess it pays to have a team of magical little elves at your every creative beck and call.) I’ve already started pinning the pictures like crazy on the Eat Chego Pinterest page. (Kogi BBQ Pinterest page, I shall get to you laters. –__–;;)

who bey running tha world, B?