…is honorably being discharged from Chego after this week. 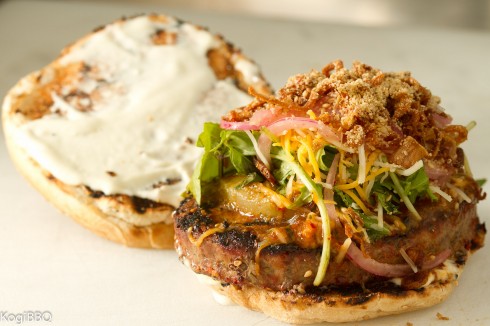 …and for those of you who are salivating over the Exhibit A and hankering for a taste — IT’S TOO LATE. IT’S ALREADY DEAD. YOU CAN’T HAVE IT. 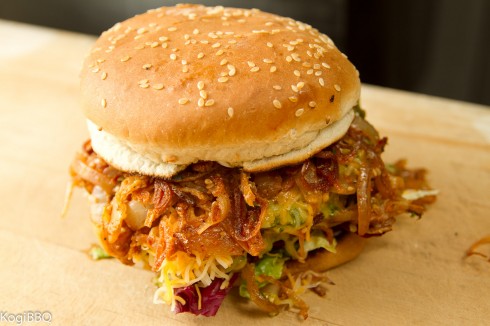 The torch has since been passed to Exhibit B — a passionate, hot mess of grass-fed beef, miso mayo, caramelized kimchi, romaine lettuce, caramelized onions and salsa verde. It’s drippier, it’s messier and completely owns that that is part of its charm.

Thankfully, for you, it’s still got one more week at Chego before it’s put out of commission.

And for those of you who can’t get over to the west side before the end of this week but still want to taste a Roy Choi Papi Chulo Burger, I can throw y’all a bone, here and there.

For those of y’all who know Papi Chulo Roy Choi/Roy Choi Papi Chulo via Chego and Kogi, it’s probably a given to expect a drippy, unkempt mess of deliciousness that will leave you thirsty for napkins and fiending for your next hit. But, really, his burgers this summer really showcase what the Roy Choi Papi Chulo mystique is all about. 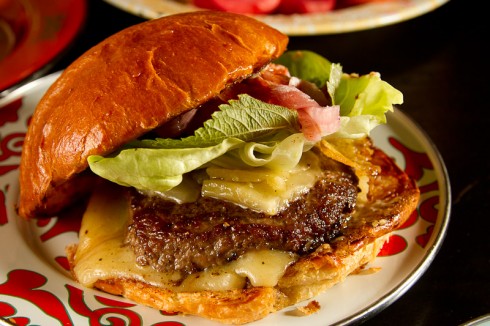 Take a look at the A Frame burger (A Frame has no affiliation w/ Kogi or Chego, but is an offshoot project of Roy Choi Papi Chulo): it comes on toasted, buttered brioche, tomato confit, pickled red onions, butter lettuce, sharp cheddar, sesame mayo and just a dash of Tapatio. The grass fed beef come in two thin patties with a melting slice of cheddar sandwiched in between — his love letter and homage to all the Korean-owned burger stands in South LA that he grew up with in the 80s and 90s.

The fancier Beechwood burger (no picture available, sorry peoples), like the A-Frame burger, is another demonstration that Roy Choi Papi Chula can TOO tuck his shirt into his pants every once in a while: a thick-ass, juicy patty with cheddar cheese, red onion, arugula, tomato jam and herb mayo on a toasted brioche bun.

A-Frame and Beechwood are, admittedly, fancier establishments than Kogi or Chego. For starters, they’ve got table service and swanky bars. But they’re really great at showing the Roy Choi Papi Chulo fan that even though the expression of the food changes depending upon the context (burger, burger, burger, burger), there’s so much LA history and storytelling in each dish — no matter how fancy or un-fancy the table setting.

Flavor-wise, is there a signature style that Roy Choi Papi Chulo holds for his burgers? I think so: toasted buns, fatty, flavored mayo, a red sauce(chili or tomato), a good hit of acid, a gentle touch of sweetness and juicy, really well-seasoned, beautiful beef patties. <-- SO FRIGGIN IMPORTANTE -- you know, I've tried some really "great" burgers here in LA that I think would have been AMAZING if they just did one, itty bitty, simple little thing: SALT THE BEEF PATTY. Man, seasoning the beef is sooooooooooooooooooooo incredibly important and makes a HUGE difference how burger first hits you. And, lucky for you, this NEVER EVER problem with Roy Choi Papi Chulo burger. Love, tacos all those of late summer, Aliiiiiiiiiiiice P.S. The Beechwood IS great, but only sticking around until fall, so wanted to give y'all heads up. XD P.P.S. Ahhh, video slideshow made me cry, it was moving. Even cheesy music! Yay tighty whities, grandma's ashes rescued Malteses. Hugs Raden Soemawinata Melbourne, Australia. ^__^

P.P.P.S. STFU!!! OMG! I’VE MET this guy! Okay, so I’m looking at this video and I’m like, “He looks a lot like the Raden I met at Coda when we were in Melbourne at the Food and Wine Festival. It’s probably not him, but it looks a lot like something he would do.” — I do a google search and: http://www.facebook.com/radenx <-- it's HIM! What a small world. Just further proof that flirtatious, happy-go-lucky pretty boys do have gold, gold hearts. Much love to you, Raden. (( H U G ))