But yeah. I don’t think the above photo needs a caption.

Okay.  Automatically we know that this book is not as sweet and flavorless as the Sweet Valley Kids, Sweet Valley Twins and Sweet Valley High series we’ve all known and… well, not loved, but consumed back in the 80s and early 90s.  There was also the most recently released SVU, which was not Sweet Valley Special Victims Unit, but Sweet Valley University.  (Lord, these girls don’t know how to travel!)

Not quite Sex and the City/Cosmopolitan/circa 2003 trashy chick-lit, cuz, well, it’s Sweet Valley, which wasn’t exactly known for interesting or 3-dimensional character development, but it’s definitely trying its hand at an adult crowd.  It’s a solid red cover w/ blond hair, so not exactly G-rated stuff.

SO HERE ARE SOME OF THE COMMENTS I FOUND ABOUT IT ON AMAZON.COM:

“…Look, I’m totally aware it’s kind of stupid to be mad about the quality of an SVH book, but to wit: there are TONS of typos in this book. Glaringly. Obvious. Typos. Either the copy editor spent that day napping or he’s got a job at St. Martin’s because he’s somebody’s nephew.

There are so many canonical details that were wrong, when researching the details is the sort of thing that would have taken about twelve seconds on Google. When anyone involved with this project could have asked ANY 90s SVH fan for the right details. Not to mention canonical errors that are flat out contradicted IN THE SAME BOOK: for example, in chapter one, Jeffrey French is married, and by the last chapter, he’s ‘enjoying his unmarried single life…'”

“What really became obvious to me after finishing “Confidential” is that we fans love Sweet Valley and the characters MORE than their creator does. What a shame that she couldn’t have cared enough to make sure that this was done correctly. In conclusion, I am going to chalk this book up to being a bad Sweet Valley dream…”

“What I got was probably the most poorly-written piece of fiction I’ve ever purchased (and I’ve purchased a lot of doozies). I counted at least three typos, three characters with the wrong name, one character mysteriously brought back from the dead, and a number of other glaring errors (since when did the Wakefields belong to the country club?) that made me believe that Ms. Pascal did absolutely zero research, and that her editors and fact checkers were asleep at the wheel.”

“Was so excited to get this book and re-live my childhood. I loved the Sweet Valley series and couldn’t wait to see what everyone was up to. However, this book was not what I expected. It was more like the Jersey Shore than Sweet Valley. Was very disappointed.”

I don’t know about you guys, but these reviews make me want to READ THIS BOOK all the MORE!!!

For some reason, I had a pretty steady diet of Sweet Valley books in my childhood, though I never liked any of the characters or stories too much — with the exception of  the thrillers and ghost stories.  Por ejemplo, when the twins were haunted by a look-alike ghost at a traveling carnival with a cream-colored dress and blue silk ribbon (Elizabeth’s favorite colors) who tried to kill Elizabeth by possessing her and trying to make her fall to her death off the top of a ferris wheel.  THAT WAS ACTUALLY A PRETTY GOOD STORY.  It had mystery, great imagery and some momentum.

Hey.  Typos.  THAT I can understand and would also be super irritated with if there were a good many of them in a 300+ page novel.

As for there being inconsistencies (though, within the SAME novel, it can get a little irritating, but Frannie Pascal’s getting up there!  And she’s had many ghost writers!  I doubt she’d remember and honor every single detail.), well, HEY.  It’s Sweet Valley, not Lord of the Rings.  There were plenty of inconsistencies when you skipped from Sweet Valley Kids to Sweet Valley Twins and Sweet Valley High.

And, I dunno.  The characters were pretty bland, all-around.  A light Jackie Collins treatment would probably make them more palatable, and it’s not like fans could reasonably expect something of Nicholas Hornby quality.

I probably wouldn’t pay $12 for it, but if I ever saw it in a dollar-bin at a used bookstore (a very likely probability 6 months from now), I’d probably pick it up without shame.  A little salt, a little high fructose corn syrup and a little tequila probably couldn’t hurt the series all too much.

In fact, it might make it a little more interesting.

I went on a pilgrimage to Laguna Hills my birthday weekend (ess where I grew up) and found a GREAT find in the Laguna Hills Mall.  It’s called the Dollar Book Fair and has a location in Long Beach as well.

WHY IS THIS PLACE AMAZING???

1) Because every book that’s not a children’s book is $2.
2) THEY HAVE AN AMAZING SELECTION.  A lot of it is fairly current, titles as new as maybe a year or 2 since coming out in paperback.
3) THEY UPDATE THEIR SELECTION EVERY OTHER WEEK.

One of my major gripes about dollar bookstores is that even though there are a bazillion books, everything’s pretty slim pickings with the most recent titles circa 1984, and even then, they’re not on particularly interesting subjects.  Old, thrown-out let-me-sell-you-my-politics books to antiquated self-help and boring, boring cook books.

Here, there’s just about anything that’s been kinda popular, from Jackie Collins to Kiran Desai’s Inheritance of Loss. I, myself, picked up a collection of Roald Dahl’s short stories, Middlesex, Gita Mehta’s RAI and The God of Animals.

AND IT’S WAY CHEAPER THAN BUYING USED BOOKS ON AMAZON, CUZ NO SHIPPING AND HANDLING CHARGES!

I’d gone on Saturday and thought that it was just GREAT!  What was even more amazing was that the manager was telling us that we were just picking through the leftovers from a 2-week-old shipment and that they’d have an even fresher selection in a few days.

And I found THIS: 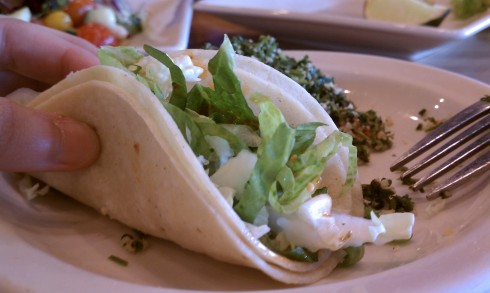 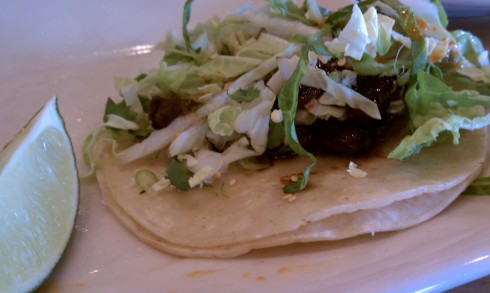 photos courtesy of http://blogs.laweekly.com/author.php?author_id=2574 <--THAT person.

In some ways I find it a little ironic and a little flattering, that this pizza-pasta-California-casual place is selling Korean barbecue tacos.  Ironic, because CPK was the restaurant that put barbecue chicken pizza on the MAP.

Remember that craze with Papa John’s and Dominoes and the like all adding barbecue chicken pizza to their menus?  Uh huh.  It was in part due to the buzz that was created via CPK.

And, what’s more, CPK made sure that it was crazy-delicious.

Being in the food industry, I oughta be some kinda food snob, but I’m not.  I still light up a little whenever we pass by a CPK or Krispy Kreme.

Were they a great value?  Nope!  Were they the best tacos I”ve ever eaten?  No.  Were they an insult to everything and anything an LA taco stands for?  Now that’s a bit harsh.

$5.99 will get you two tacos that may appear a bit under-filled.  We counted four niblets of meat in each taco.  No chips, no salsa, nothing extra on the side other than a dry slice of lime.

But they took the care to make sure to get two 5-inch corn tortilla rounds and to warm them up before serving.  They were soft and pliant, which is a lot more than I can say about most tacos at a sit-down restaurant at a non-Mexican establishment.  So kudos to CPK for that!

As for it’s Romaine-napa cabbage slaw, a smiled when I saw that on the menu and when I got it on the plate.  “Nice try, CPK,” I thought.  No chili-soy vinaigrette, no green onions.

Kogi tacos are amazingly messy and reasonably accused of being overstuffed.  So for people who don’t like meat falling out every time you take a bite, you might like these.

The meat was decent for what it was.  It wasn’t smokey or charred or double caramelized, but the marination was nice and it was tender, not tough.  ALL FOUR PIECES!!!

And it’s funny.  As I was finishing my CPK taco, I realized what a bargain our tacos really are.  (( H U G )) I feel so proud of us and what we do!

I know!  It’s been a whole year!!!  So we’re celebrating it with a little bit of a bang.

We’re still hammering out details w/ a birthday ricebowl and dessert special, but the actual festivities will take place this WEDNESDAY, APRIL 13th, 2011 at 9PM. 3300 Overland in Palms, just off of Rose.

The bowl SHALL CONTAIN, but not be limited to:
* prime rib
* pork belly
* red tofu
* chicken
* all sauces
* egg
* herbs
* birthday rice

WINNER will have the glory of a $20 Chego gift certificate as well as anything that they’d like to take home with them from our very ample and abundant shelves.  ANYTHING.

Thank you for an amazing year, y’all!  Let’s make this next year just as great.  IF NOT MORE.

P.S.  I saw this video on the world’s best contact juggler and just thought it was pretty incredible!